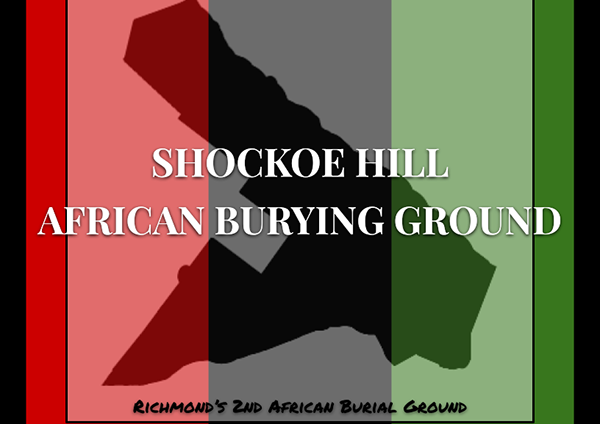 The Virginia Department of Historic Resources will unveil a historic highway marker for the Shockoe Hill African Burying Ground at a ceremony on June 12 at 2:30 p.m. at 1305 N 5th St.

On March 17, at its Quarterly Board Meeting, DHR listed the Shockoe Hill Burying Ground Historic District on the Virginia Landmarks Register (VLR).

The Shockoe Hill African Burying Ground is likely the largest burial ground for free people of color and the enslaved in the United States. It is conservatively estimated that over 22,000 people of African descent were buried in its expanded 31 acres, which began as two (1 acre) plots. It was opened in 1816, and closed in 1879 due to overcrowded conditions. It has suffered many abuses, and was purposely made to disappear from the visible landscape. It is one of  Virginia’s most endangered historic places. Current threats to the burial ground include the DC2RVA passenger rail project (high-speed rail), and the proposed widening of I-64, along with various infrastructure projects.

As stated in the nomination for the Shockoe Hill Burying Ground Historic District, it is a significant example of a municipal almshouse-public hospital-cemetery complex and illustrates the changing social and racial relationships in Richmond through the New Republic, Antebellum, Civil War, Reconstruction, and Jim Crow/Lost Cause eras of the 19th and 20th centuries, The district features a suite of municipal functions and services concerned with matters of public welfare, health, and safety, which the City of Richmond relegated to its then-periphery on its northern boundary during the 19th century. This district includes three newly identified sites, the Shockoe Hill African Burying Ground, the City Hospital and Colored Almshouse Site, and the City Powder Magazine Site, all of which have been erased from the visible landscape. It is the invisible and long forgotten Shockoe Hill African Burying Ground, which is being honored with an historic highway marker on June 12th.

While the ceremony will provide some seating, we expect a crowd, so please bring your own chair.