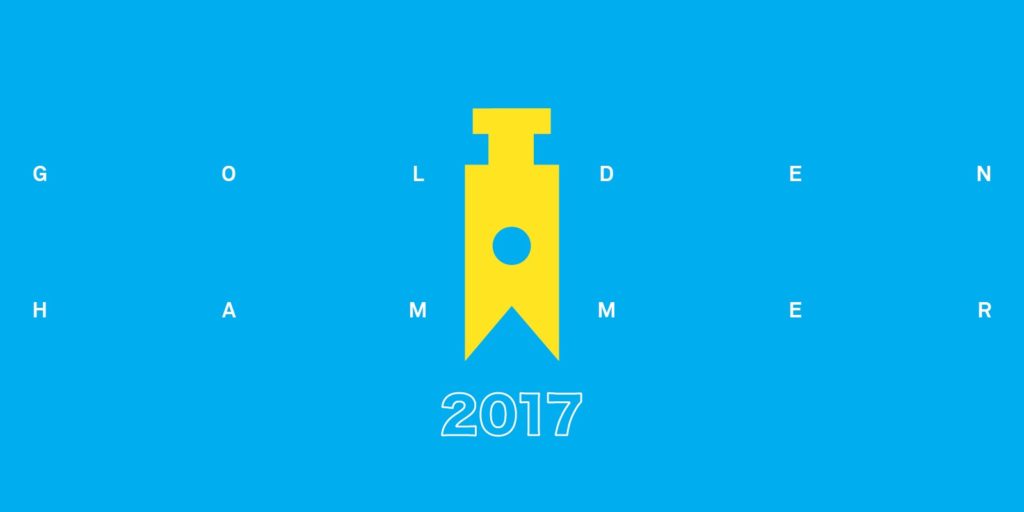 Historic Richmond and storefront for community design are excited to announce the winners of the Golden Hammer Award. We had a record breaking 48 nominations this year! Over 150 people were attendance on November 2 to support those who were nominated.  It was a wonderful night to celebrate the variety of nominations and how each project brought new life to our historic built environment and their impact on our communities. Judges opted to split categories into “large” and “small” projects, or those above or below 5,000 square feet. The best place-making category was divided between “private” and “public” projects. Photos and a description of the winning projects are below.

This mixed use project – by Architecture AF and QHCI – is in Jackson Ward. The back half of this double house dates back to the 19th century, but a fire destroyed the front half. Because the original Queen Anne front facade was destroyed, the building is considered non-contributing to the historic Jackson Ward historic district. But that gave the project team more design flexibility to explore how an addition to a historic building could be both contextual and of its time – not necessarily bound by Secretary of Interior Standards, but most of all a good neighbor. They rebuilt the second floor of the building in the same footprint as the building next door – a nod to the building’s original form of a double house. Taking cues from the playfulness of Queen Anne Victorian style, they added a modern dormer with two skylights where the historic conical turret had been. By using different, contemporary materials but in an arrangement and massing similar to the double house next door, the new addition revives the original relationship between the two structures, but with a new, interesting dialogue.

This tax credit project – by Mobelux, B.O.B. Architecture and Mike Smith Construction and Keiter – adapted an 80-year old deteriorating U.S. post office into office use for a software company and has received a great deal of favorable coverage in the press. Every major system was redone, from HVAC to networking. Special care was taken in order to feather modern architecture into period architecture, all while respecting the historic elements of the building under Federal protection, such as the carved eagle above the entrance, the inspector walkway suspended above the workfloor, and the original marble and terrazzo lobby. Transforming the lobby into swing space for hackathons, a boiler room into a billiards room, and a musty basement locker room into a theater (complete with seats rescued from the Byrd Theater), this is the modern, technology-infused workplace of the future!

This entry – by The Maggie Walker Community Land Trust, co-developer Project Homes and architect David R. Winn – is the first house built by the Maggie Walker Community Land Trust. A community land trust (CLT) is an innovative approach to homeownership that turns vacant and blighted property into permanently affordable housing. A CLT owns the land beneath a house, and sells the home to a low- to moderate-income buyer. By removing the cost of the land from the total price of the home, CLT’s create affordable housing while residents build equity as homeowners. This house will act as a permanent buffer against rising home prices in Church Hill, which increased 30% in the last five years. Not only that, but the house meets the “Earthcraft Gold” standard, and the cornice design is from the original homes in the area of the Model Block in Church Hill North. We look forward to seeing the transformational impact of the MWCLT as it gains momentum!

A large portion of this site slopes to the south and west toward a perennial stream and wetlands that are protected from development. To take advantage of the views into this natural habitat, the structure was sited at the top of the slope and the site plan created generous open space for public gatherings and community events. The design team achieved its goal of making this space relevant, useful, and productive for generations of users. The structure is rooted in its natural environment as much as it is rooted in the community. It is configured to be a series of pavilions emerging from and cascading down the landscape. The forms of the pavilions reflect the community’s vernacular architectural heritage, being vaguely reminiscent of a collection of tobacco barns. A simple palette of building materials inside and out reinforces this concept. This architecture identifies itself as a reflection of the community’s aspirations for cultural and individual advancement, while also being a logical extension of the history that shaped the local community culture.

This entry sprouted from a true “grassroots” effort by the community. Project leaders Beautiful RVA: The Ginter Urban Gardener Program Spring Class 2017 worked with the members of Sixth Mount Zion and the Jackson Ward Community AND BEAR WITH ME NOW – Altria / Renew Richmond / Hands On Greater Richmond / Lewis Ginter Botanical Garden – / Storefront for Community Design / The Greater Richmond Community / Dominion Energy / and The Community Foundation. Fifty years ago the Jackson Ward neighborhood was torn apart by the construction of Interstate 95. The community fought to preserve the historic Sixth Mount Zion Baptist Church. That fight also saved a small triangle of land where this Community Garden is located. This project involved a volunteer effort to plant nine fruit trees, 25 inkberry bushes and 20 grape vines, and construct 12 raised beds and an accessible winding path. Bricks from the foundations of demolished homes were uncovered during the garden’s installation. Going forward the garden will require continued volunteer efforts for the care of vegetables to feed the homeless and community members that participate in the Six Mount Zion Feeding programs, the creation of a native pollinator garden, and programming to engage the community in the space. To share the impact of this project, let me quote from this beautifully written nomination:

“Usually, a reflection garden is located in a quiet, peaceful spot and I am afraid ours will always be interrupted with the roar of the traffic going by, reminding us that the past in this place has not been a peaceful one. Sometimes we have to shout to tell the story, but sometime we speak loudest when we simply sow some seeds and struggle together to dig out broken bricks that once had been homes, to make space for new trees. In the breaking of ground and in the texture of each scarred and crumbling brick, we will remember. It is important to not be afraid to plant in hard places.”

These words reflect the soul of this city. This is the essence of placemaking!

This City of Richmond entry celebrates esteemed businesswoman and civil rights activist Maggie L. Walker, a Richmond native who was the first African-American and the first woman to charter a bank in the United States. Public input contributed to the success of the project with the project team gathering input on key stakeholder concerns, such as the site selection, the removal of a tree, and the creation of a useful public space. The Memorial Plaza’s location is a gateway to Jackson Ward and is within a short walk to her home, a National Park Service site, and her businesses. This placemaking project creates a public gathering space as well as a monument, contributing to the overall revitalization of the community. Despite the ongoing construction along Broad Street, we already see the power of this place as pedestrians stop to contemplate this great lady and her achievements!

This tax credit project – by Bank Street Advisors, SMBW, Commonwealth Construction Management and Sadler & Whitehead – is an active participant in the ongoing revitalization of Broad Street. This team created a signature retail experience and dynamic workspace for one of Richmond’s coolest new retailers. Our judges thought this project reflected a classical approach to doing exactly what storefronts on Broad Street are supposed to do – The storefront window and interior space meets the modern-day needs of fashion retail and office environments, while paying respect to and embracing the existing historical fabric of the building.

This entry – by the Black History Museum, Baskervill, Emerge Construction Group and a host of other partners – renovated and expanded Jackson Ward’s historic Leigh Street Armory. Originally constructed in 1895 for Richmond’s African American militia group, the building is truly one of Richmond’s most significant, recognizable for its distinctive crenelated brick facade. Listed on the National Register, it is recognized as the oldest, purpose-built, armory in Virginia and the only 19th-century black militia armory still standing in the United States. During the era of Jim Crow and segregation, it served the African-American community as an elementary school, a WWII center and a youth gym. Damaged by fire in the 1980s it stood vacant for decades. The construction of the museum, which began in 2012, had a strong positive impact on the surrounding community with a primary objective of including local and minority entities in the development process — one that mirrored the objective of the armory’s initial construction. During construction a group of 18 people received on-the-job training for the project. Black-owned businesses also played an integral role in the success of this project; 70% of the work was performed by fifteen black-owned companies. This tax credit project preserves the armory’s original façade and incorporates similar brickwork and masonry in its addition, creating a seamless transition from old to new.

View the map to see this year’s nominations!

The Golden Hammer Awards are supported by: