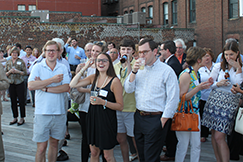 Want to get on the guest list for some of the most exciting social engagements in Richmond? Membership in the Quoit Club gets you an all-access pass to the past, with members-only tours inside some of the most interesting buildings and locations in the city. You’ll mix and mingle with great people, enjoy fantastic food and drink and absorb fascinating expert commentary on Richmond history, architecture and culture. Part Happy Hour and part field trip, there’s nothing quite like a Quoit Club event.

Traditionally, quoits was a game played during the 1820s and 1840s with steel rings and metal spikes–think 19th century horseshoes. Through social gatherings, the Quoit Club supports Historic Richmond’s mission by engaging its members in caring about and for our distinctive built environment: past, present and future.

The season runs from March until October of each year; events are typically scheduled for the third Thursday of each month. Members must be at least 21 years of age.

Congregation Beth Ahabah is one of the oldest congregations in Richmond. It moved to its current location in 1904 with the completion of a magnificent Neoclassical structure. Over the years, it expanded its campus to include the 1912 Joel House and a 1957 educational building and several other nearby townhouses. A new modern structure successfully ties together three buildings with different floor elevations and beautifully complements the historic streetscape with its massing, scale and materials. Join us for a free event as we learn more about Congregation Beth Ahabah, a 2019 Golden Hammer Award Winner for Best Placemaking.

After nearly two and a half years of planning, meetings, site visits and working through the issues with fellow nonprofits and government officials, we are excited to be moving forward with the Gateway Corridor Revitalization Project – a unique partnership with project:HOMES and the City of Richmond to rehabilitate three properties in Southern Barton Heights for affordable housing.

The properties to be rehabilitated were vacant, blighted, and tax delinquent properties – no long term residents were evicted. And they are not the grandest buildings in the area. These properties represent good to excellent examples of each of the characteristic architectural styles found in the neighborhood – The Late Victorian, Queen Anne, and Colonial Revival styles. Each property is geographically located within close proximity to each other, is a visible presence along a primary gateway corridor into the Southern Barton Heights neighborhood, and is sized appropriately for below median income homeowners.

Maggie Lena Walker devoted her life to civil rights advancement, economic empowerment, and educational opportunities for Jim Crow-era African Americans and women. As a bank president, newspaper editor, and fraternal leader, Walker served as an inspiration of pride and progress. Today, Walker’s home is preserved as a tribute to her enduring legacy of vision, courage, and determination.

The Maggie L. Walker National Historic Site is comprised of Mrs. Walker’s historic home and several surrounding buildings that serve as the site’s visitor center and exhibit hall. Together, they cover about a quarter of a city block in Richmond’s historic Jackson Ward neighborhood.

Parking Information: The house is at 110 1/2 Leigh Street and the visitor center — and site entrance — is around the corner at 600 North 2nd Street. Parking is usually available along city streets.

An adaptive reuse of a 1940’s warehouse in Richmond’s Scott’s Addition neighborhood is the new home of the McKinnon and Harris corporate headquarters, regional showroom, and worldwide fabrication facility. Alongside serving an intensive set of functional requirements, this project sought to reflect a sophisticated brand recognized internationally for the design and craftsmanship of the highest quality outdoor furniture.
Marked by simplicity, clean lines, and abundant natural light, the offices and showroom evoke the qualities of a sophisticated garden setting and provide a deferential backdrop to the beauty of the McKinnon and Harris furniture. The showroom provides a timeless gallery setting which is at once quiet, strong, graceful and self-assured.

A creative adaptive reuse project and 2017 Golden Hammer Award nomination, Blue Bee Cider is located in the historic Summit Stables in Richmond’s Scott’s Addition neighborhood. The former city stables complex, built in 1940 is made from old granite street cobbles, it replaced a wooden stables structure that burned down while the horses were out working. It’s a contributing structure to the Scott’s Addition historic district listed on the State and National Register of Historic Places.

In 1950, five years after the end of World War II, the Virginia General Assembly authorized the construction of a memorial to honor and remember the nearly 10,000 Virginians who made the ultimate sacrifice serving in the U.S Armed Forces. Nearly five acres of land overlooking the James River and downtown Richmond were allocated for the Memorial, and Samuel J. Collins of Staunton and his nephew, Richard E. Collins won an architectural competition among Virginia architects.

The Collinses created a brilliant and timeless design that embraced the dramatic site as well as any building in Richmond. Suggesting a Greek temple, the open pavilion, with highly stylized classical elements such as columns and an entablature, has a solid wall of smooth, stone block on its western side that shields traffic noise and the relentless afternoon sun. On the shrine’s eastern side, each bay contains a huge sheet of glass on which are listed the dead, their names forever set against the backdrop of their capital city.

Set within the pavilion and visible to passersby is “Memory,” a 22-foot-tall statue of an allegorical female in grief. An eternal flame flickers at its base. The design was Leo F. Friedlander, noted sculptor who also worked on sculptural elements at Rockefeller Center in New York City.

As construction began, America entered the Korean War and plans were changed to include the heroes of this conflict. Built immediately to the north of the pavilion was a small auditorium and office building that played only a supporting role architecturally.

The 20-story project is approximately 1 million square feet and occupies a full city block. It includes a high-performance workplace for over 1,000 employees, street-level retail, employee amenities and parking. The building is targeted LEED Gold and integrates a range of sustainability strategies including a high-performance exterior enclosure, energy efficient mechanical/electrical systems, and an exterior landscaped terrace which captures and utilizes rainwater.  With a unique curved form inspired by the shape of a sail, 600 Canal Place has transformed the Richmond skyline. The project is designed to promote new ways of working and to enhance productivity and efficiencies that will redound to the benefit of Dominion employees and customers.

Port City is a $28.6 million pioneering economic development project on the historic Route 1 corridor. Not only is it the largest new residential project in this challenged area, the project includes the largest solar installation in Richmond – which greatly reduces utility costs and lowers the project’s carbon footprint. It is a mixed-income, high quality, affordable housing development.

The adaptive re-use of six buildings that were once the American Tobacco Company leaf processing facility includes a number of amenities- too many to list here. The tobacco sheds feature units with an exposed historic timber roof structure and large windows creatively concealed by see-through perforated panels that match the corrugated metal skin of the warehouses.

Highlights of Hollywood Cemetery with the Valentine
412 S. Cherry Street

Stroll through Hollywood Cemetery and explore the history and landscape that comprises this public space. This walking tour focuses on the cemetery’s unique history, its landscape design, architecture, symbols and noted residents.

Hollywood Cemetery has it all: Civil War ghosts, mausoleums, pyramids, and a great place to run in the morning. Founded in 1847 by Richmond locals William Haxall and Joshua Fry, Hollywood Cemetery sold its first grave in 1849. Since then, the cemetery has become the resting site of numerous historical figures. Two United States Presidents: James Monroe and John Tyler reside in the cemetery. The cemetery is home to many other prominent and historical local figures such as teachers, congressmen, generals and even a Supreme Court Justice.