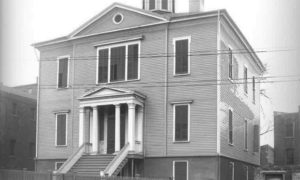 Masons’ Hall is the oldest building in the United States erected for Masonic purposes and continuously used for that purpose.  Due to its age, history of uses and association with important personages, Masons’ Hall at 1807 E. Franklin Street is one of Richmond’s most significant buildings.

What is the Masons’ Hall and why is it important?

Due to its age, history of uses and association with important personages, Masons’ Hall at 1807 E. Franklin Street is one of Richmond’s most significant buildings. Built in 1785, its history is so closely intertwined with the early history of Richmond that it is at times impossible to separate them. The leaders of Masons’ Hall (including John Marshall and Edmund Randolph) were leaders on the national stage, honing the governing principles and building the governmental institutions that are the foundations of our nation to this day. They built this country like they built Masons’ Hall – on the Masonic principles of faith, hope, charity, and civic engagement – and Masons’ Hall serves as a reminder of the impact of those principles on our early years as a nation. The masons of Masons’ Hall built Richmond too – laying the cornerstone of the Virginia State Capitol, as well as the cornerstones of many of Richmond’s other historic structures. As one of the two largest meeting spaces in the early years of our city, Masons’ Hall hosted the delegation to the Constitutional Convention, Richmond City Courts and Richmond City Council. Masons’ Hall was opened not only for governmental functions, but also to religious groups unwelcome elsewhere.