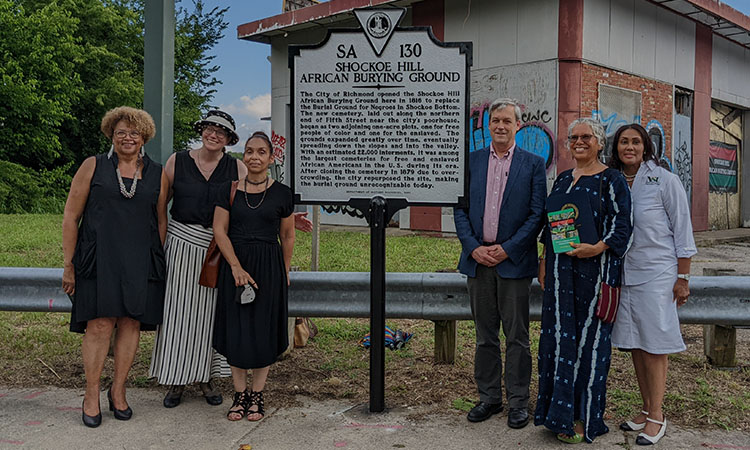 Thank you Lenora McQueen for her research and leadership, the City, the speakers including Sen. Warner’s representative, the Department of Historic Resources, Preservation Virginia, and Valentine Museum!

At the Quarterly Board Meeting, the Virginia Department of Historic Resources listed the Shockoe Hill Burying Ground Historic District on the Virginia Landmarks Registry. The nomination will be sent to the National Park Service for review for listing on the National Register of Historical Places. The Shockoe Hill Burying Ground Historic District is a significant example of a municipal almshouse-public hospital-cemetery complex and illustrates the changing social and racial relationships in Richmond through the New Republic, Antebellum, Civil War, Reconstruction, and Jim Crow/Lost Cause eras of the 19th and 20th centuries. The district features a suite of municipal functions and services concerned with matters of public welfare, health, and safety, which the City of Richmond relegated to its then-periphery on its northern boundary during the 19th century. This district includes three newly identified sites, the Shockoe Hill African Burying Ground, the City Hospital and Colored Almshouse Site, and the City Powder Magazine Site.

We are grateful to Lenora McQueen for her leadership, tenacity and extensive scholarship which served as the foundation for this monumental moment. We also thank the other historic nomination co-authors – L. Daniel Mouer, PhD, Ryan K. Smith, PhD, and Steve Thompson – for their leadership and scholarship, as well as the following partners for their dedication and support: Ana Edwards of the Sacred Ground Historical Reclamation Project, Ellen Chapman of RVA Archaeology, Kimberly Chen of the City of Richmond, Preservation Virginia, the National Trust for Historic Preservation, Cultural Landscape Partners, and Hannah Jane Brown of the University of Virginia, and many, many other friends and supporters – too many to list here

This is truly exciting news, but there is more yet to do.