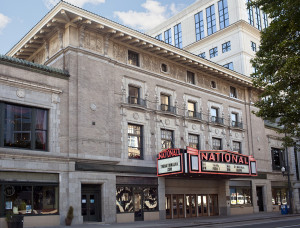 Musicians are terrible liars. Just think about what happens at the end of a concert. The band says “thank you” and “goodnight,” but they don’t mean it. Sure, they wave goodbye, but everybody knows they’re coming back. They just want to hear you clap for ten minutes straight so they can act surprised and come out for the “fake encore.”

They want you to believe that your thunderous applause has convinced them to play a few more songs. The truth is, they always planned on coming back. They just want you to work for it. But if you think clapping for ten minutes is exhausting, try doing it for 22 years.

It was 1986 when the owner of the National Theater announced plans to officially end the performance run of the 1922 venue with a wrecking ball. In its place would be a parking lot. Historic Richmond was not thrilled by those plans.

We believe in adaptation and reuse. Transforming old houses and buildings by giving them a new purpose adds character to our city and taps into our authentic history. It’s creative. It’s economical. And it’s also incredibly cool. Richmond entrepreneurs are already experts at this sort of “urban upcycling.” They’ve converted tobacco warehouses and cookie factories into condos, department stores into downtown eateries and an old bank into a bridal boutique.

Ironically, the backstory of the National actually starts with a demolition. In 1922, a group of local businessmen bought the Rex Theater (built in 1909) and promptly smashed it to pieces. In its place they set about creating what they hoped would become the finest theater in Richmond.

They enlisted the help of renowned architect Claude K. Howell and skilled Italian artisan Ferruccio Legnaioli. The completed National Theater was an opulent entertainment destination, filled with lavish architectural adornments in plaster, marble and bronze. It impressed more than 2000 lucky patrons (including the governor) when it opened on November 11, 1923.

The National Theater played host to big bands, vaudeville acts and motion pictures throughout the next four decades. It became one of the jewels in Downtown Richmond’s performing arts crown, joining the State and the Colonial on the 700 block better known as “Theater Row.” But times changed and things took a turn for the National in 1966. A changing landscape required a new direction for the old classic. The National was repainted. The marquee was replaced and the name was changed to the Towne Theater.

Audiences watched movies at the Towne through the rest of the 1960s, the 1970s and the start of the 1980s. When it finally closed its doors in 1983 (with an anti-climactic, last gasp showing of Lou Ferrigno as “Hercules”), it marked the end of the downtown movie houses. For years, the building sat empty and unused, awaiting its fate on “downtown death row” until Historic Richmond arrived with pardon in hand.

Volunteers hand-restored the incredible architectural details and plaster work inside and out. Historic Richmond trustee and dedicated volunteer Jim Whiting, often called “Mr. National Theater,” restored the interior ornamentation and paint work. Layer by layer and piece by piece, the original masterpiece was revealed. In 2003, the National was added to the National Register of Historic Places.

Restoration continued until Historic Richmond could find a suitable buyer (we were very picky). In 2006, we connected with developers who had plans to open a live music venue. We loved the idea that once again, the National Theater would play host to national entertainers. We loved the idea that the corner of 7th and Broad could be bustling with activity again. The fit was right. The deal was made.

On February 21, 2008, the National reopened as a 1,500-person capacity concert venue. Historic Tax Credits helped fund the complete $15 million renovation. Its debut was just as impressive as that banner opening night back in 1923. Thanks to the vision of its owners, decades of volunteer effort, and collaboration from the community, downtown Richmond shines a little brighter–and rocks a little harder–these days.

And to everyone at Historic Richmond, as well as the dedicated fans who had been putting their hands together for the last 25 years, it was an encore that proved more than worth the wait.