What stories do these buildings tell?

December 22, 2016 | historicrichmondadmin | Comments Off on What stories do these buildings tell? | Uncategorized 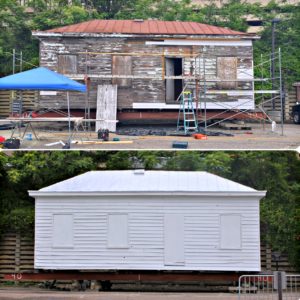 Both buildings are frame structures currently located within blocks of each other in the Shockoe Valley. Both are overlooked sites that connect us to our past and define who we are as Americans, as Virginians and as Richmonders. And both are structures that Historic Richmond has devoted significant efforts to saving in 2016.

But the story of each building is very different.

One is a humble dwelling house, built by a slave owner for a woman born into servitude and their five children. The other is a landmark civic space, built by the men who not only built Richmond but also built this nation.

The Winfree Cottage is the last remaining cottage of a community of 17 similar houses originally located in Manchester. It is believed that Emily Winfree, born into slavery in 1834, was given this cottage in 1866 by her former owner, David Winfree, and continued to live in one half of this 700 square foot cottage while renting out the other half. This year, Historic Richmond partnered with a number of organizations and individuals (Storefront for Community Design, the City of Richmond, the Slave Trail Commission, Siewers Lumber, Restoration Builders of Virginia, David Herring and Selden Richardson, among others) to effect the stabilization, coordinating with a number of local businesses to obtain donations of materials and bids for labor. But this is only the first step towards permanent stabilization. We look forward to working with our partners and the community to find a permanent home for this structure. There is still a great deal more work to be done.

Masons’ Hall is the oldest building in the United States erected for Masonic purposes and continuously used for that purpose. Built in 1785-1787, its history is so closely intertwined with the early history of Richmond that it is at times impossible to separate them. The leaders of Masons’ Hall (including John Marshall and Edmund Randolph) were leaders on the national stage, honing the governing principles and building the governmental institutions that are the foundations of our country today. They built this country like they built Masons’ Hall – on the Masonic principles of faith, hope, charity, and civic engagement – and Masons’ Hall serves as a reminder of the impact of those principles on our early years as a nation. The masons of Masons’ Hall built Richmond too – laying the cornerstone of the Virginia State Capitol, as well as the cornerstones of many of Richmond’s other historic structures. As one of the two largest meeting spaces in the early years of our city, Masons’ Hall hosted the Virginia delegation to the Constitutional Convention, Richmond City Courts and City Council. Masons’ Hall was opened not only for governmental functions, but also to religious groups unwelcome elsewhere. Now Masons’ Hall is at risk. Historic Richmond has been working with the masons to help develop solutions for this historic structure and is working cooperatively with them towards implementing additional preservation protections. There is a great deal of work to be done before this national treasure is safe.

Richmond’s historic buildings – from landmark civic buildings like Masons’ Hall to its most humble dwellings like the Winfree Cottage – define Richmond’s distinctive character. Maintaining that unique sense of place is fundamental to Richmond’s bright future.

Every day, Historic Richmond protects and promotes the historic buildings and places that make Richmond unique, beautiful and authentic. Your generosity and financial support are vital to sustain Historic Richmond’s preservation work on these and other at risk properties. We need your help to preserve historic buildings like these so that these places can tell their stories to the generations to come.

I hope you will take this opportunity to re-invest in our important work by making a gift today.  We truly could not do it without you.