January 7, 2015 | historicrichmondadmin | Comments Off on Buildings we love: Egyptian Building, 1845 | Buildings We Love 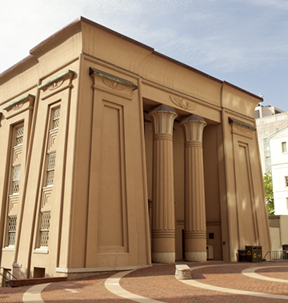 Built in 1845, this Egyptian Revival style building was designed by Thomas Stewart the for Medical Department of Hampden-Sydney College, which later became the Medical College of Virginia. It is considered one of the nation’s best examples of the Egyptian Revival style. The building has remained in continuous use since its completion and is the oldest medical college building in the South.

The exotic exterior is extremely well preserved. Notable architectural features include the diamond-paned windows, columns of bunched reeds with palm leaf capitals, and a mummy-themed cast iron fence forged by R. W. Barnes of Richmond. This unique historic building is listed on the National Historic Landmark.