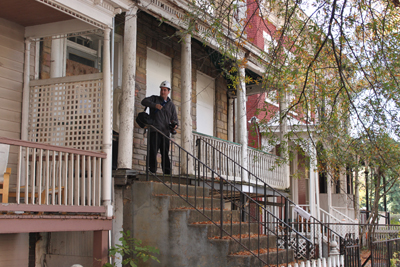 When 511 W. Marshall Street was listed on the City’s Imminent Danger List for demolition in fall 2013, due to multiple code violations, Historic Richmond stepped in to see how we could help. Our friend, Bill Davis, of William J. Davis Consulting Engineers offered to lend a hand by donating his time and talent to evaluate the building. He provided Historic Richmond and the City with structural engineering plans for a temporary fix to address stabilization issues and halt deterioration.

In August 2014, using Davis’ plans, the City completed the temporary stabilization of 511 W. Marshall Street and removed it from the Imminent Danger List. The building is now on the wait list for the City Attorney’s office to establish a clear title so it can be sold for unpaid real estate taxes.

Historic Richmond will continue to monitor the property until it is acquired by a responsible owner.