October 15, 2014 | historicrichmondadmin | Comments Off on The Blackwell House 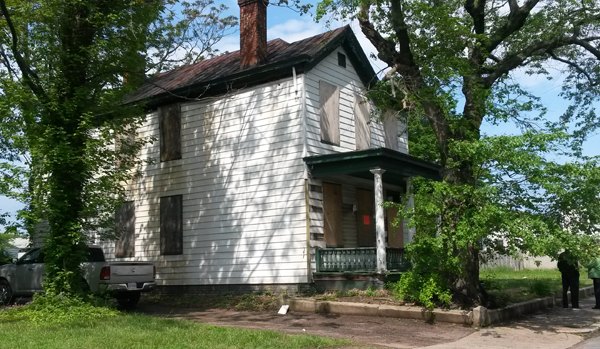 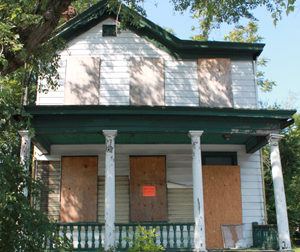 Historic Richmond is monitoring 211 E. 18th Street in an effort to find an appropriate buyer who would take the time to restore the building.

The Blackwell neighborhood is a historic community, though not listed on the National Register or in a City Old and Historic District. This house has ties to the James Heyward Blackwell (1864-1931). James Heyward Blackwell, probably born a slave, became a prominent educator for more than 40 years of his life. He established a building and loan association, an insurance company and real estate business. Both the neighborhood and elementary school are named in his honor.

The simply designed house is a Vernacular late Victorian with columned portico and sawnwork at the eaves of the gable. Vacant for a number of years, it has suffered severe deterioration at the roof eaves, allowing water to penetrate the exterior walls. The interior, however, still boast its original architectural features, although having been made into a duplex.

Historic Richmond is working with the Richmond Redevelopment and Housing Authority to find resources to stabilize the Blackwell House until plans for its future can be made.

In 2015, we worked with the Richmond Redevelopment and Housing Authority to find a buyer who would rehabilitate the historic Blackwell House. Vacant for many years and suffering severe deterioration, unfortunately, the house caught fire and was demolished in 2018. Southside Community Development & Housing Corporation incorporated salvaged materials into a new home on the site. Historic Richmond donated a plaque honoring the history of the house and its association with James Blackwell, the namesake for the neighborhood.