The Membership Drive is a FREE event open to everyone interested in joining the 2018 Quoit Club season. Registration is required. RSVP to [email protected] or 804.643.7407

Originally the Binswanger Glass Company factory, the building is an example of Modern-style architecture in Richmond. Binswanger & Company was founded in Richmond in 1879 by Samuel J. Binswanger. The company began as a builders’ and painters’ supplier and also carried a large stock of window glass, of which they were the distributors for the largest manufacturer in the world (1893) called Chambers & McKee Glass Company. The factory was later sold to the HandCraft Cleaners and was used as their corporate headquarters and cleaning facility.  Between the years 2008-2017 the cleaning facility was moved to South Richmond into a state of the art manufacturing facility. Currently, the building is being converted into a mixed-use structure with a footprint of +/- 90,000 SF including a new mezzanine.  The overall design intent was to modernize the infrastructure and access, while maintaining the original design as much as feasible.  Building upgrades include: new electrical systems, new plumbing system, new HVAC systems, new windows and doors.New tenants to date include: EvaTran ,The Fahrenheit Group, 510_Architects, Vasen Brewing, Hazen and Sawyer, Stellas Market, Smither & co, and Randstad.

Parking Reminders:
The HandCraft building takes up a full city block in Scott’s Addition (Roseneath Rd and Mactavish Ave running North and South, with W. Leigh St and W. Moore St running East and West).
When you arrive to the HandCraft building there is a parking lot at the corner of Moore St and Mactavish Ave that you will be able to park in. Street parking is also available.
The door will have a Historic Richmond Sign at 1501 Mactavish Ave (it is the door next to the Fahrenheit group) and that is where you will enter for Quoit Club. 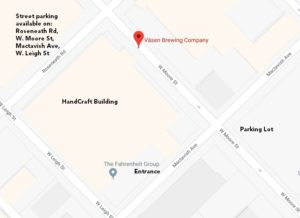