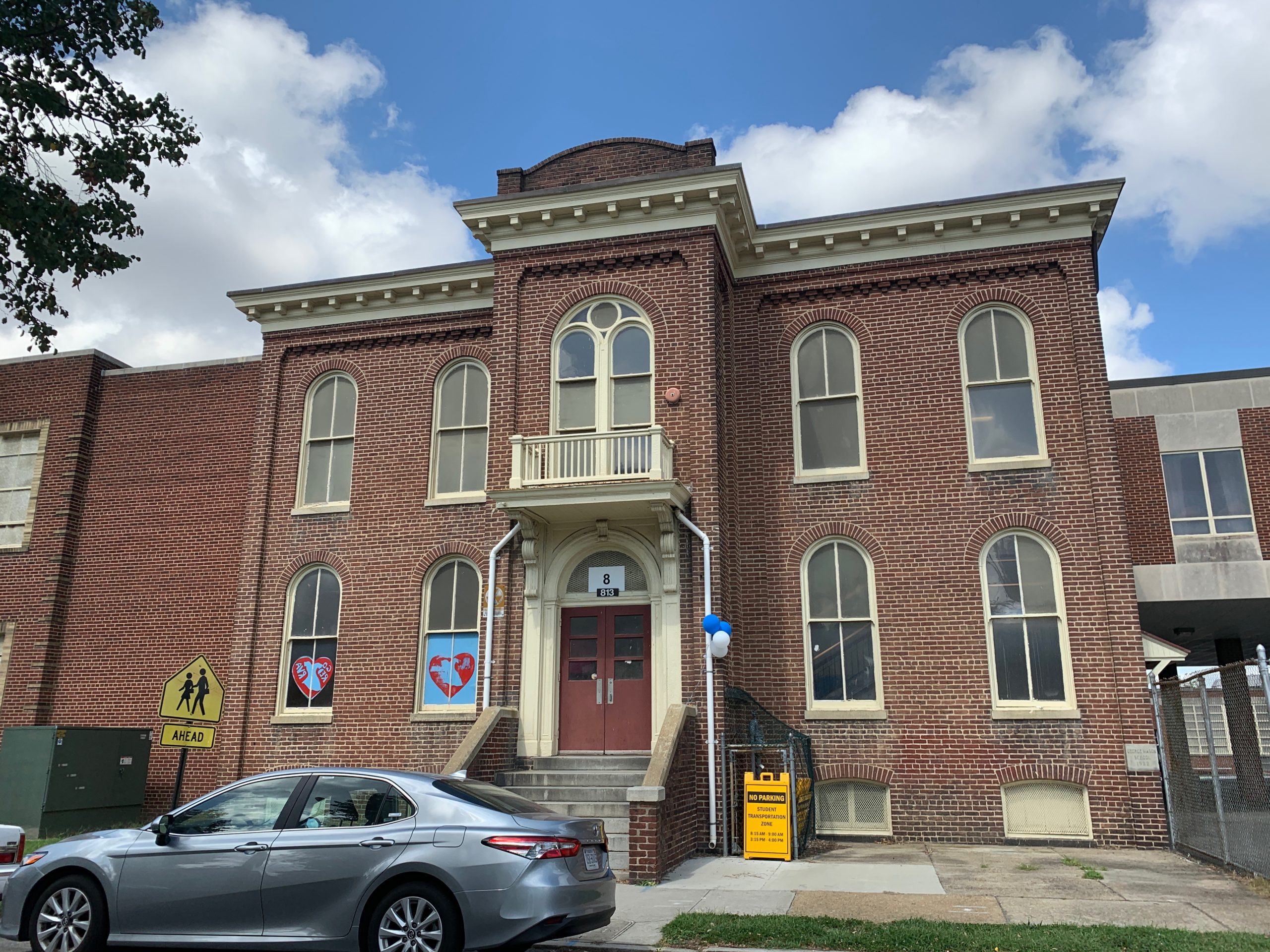 Thanks to some super sleuths, it was noted that the oldest remaining portion of George Mason Elementary School (Figure 1) incorporates a cornerstone with a 1922 date. The George Mason Elementary School has a complex history, more complex than could be appropriately captured in our original brief post. This cornerstone is an important element in understanding how the George Mason School site reflects the larger story of public education in Richmond, including disparities in the construction and treatment of racially segregated schools.

The first school building constructed on the George Mason School site was a four-room frame building built in 1881. In 1887, a brick addition was constructed to accommodate crowding at the school. (The one story frame 1881 structure can be seen in the center of the photo in Figure 2 below, while the 1887 structure can be seen on the right). The 1887 brick structure was built in a simplified Romanesque Revival style, with slightly arched windows and a decorative cornice. Until 1909, when the school’s name was changed to George Mason, the school at this location was known as the East End School.

Chronic school overcrowding necessitated expansion. In 1922, a twelve classroom brick building was added to the site. (This structure can be seen in Figure 1 and in the left background of Figure 2.) It is this 1922 structure that has raised a few questions. Why does this structure so closely resemble an Italianate building of the 1880s in design, materials and workmanship, yet incorporate a 1922 cornerstone?

In essence, this building is a 1922 reconstruction and reinterpretation of an 1873 school building, which was one of the first purpose built structures of Richmond’s public education system. The 1922 structure was overseen by Charles M. Robinson, Richmond’s Public School Architect from 1909-1930, who is credited with some of Richmond’s most architecturally significant school buildings. There are many reasons this structure is so intriguing. Perhaps one of the most intriguing is its provenance and origins. The architectural fabric of this structure was drawn from Richmond High School, later known as the John Smith School building, constructed in 1873 at 805 E. Marshall Street (Figure 3).

George Mason School continued to serve as the Black elementary school in the East End until segregation ended. The school was expanded with additions including: a 14-room addition in 1936; a 12-classroom wing in 1951; and the Henry L. Marsh III Wing in 1979-1980. Published accounts refer to the demolition of the original 1881 frame building in 1974, but the two-story 1887 brick structure also was demolished to accommodate the Marsh Wing.

It is helpful to understand the George Mason school buildings within the larger context of public education in Richmond. Richmond took the first steps to launch a system of public education in 1868, working with the Freedman’s Bureau, the Peabody Fund and other groups. In 1869, City Council established a system of free schools. In 1871, Richmond’s schools became a part of the state system, established following the adoption of the 1869 Virginia constitution.

Prior studies of Richmond’s public education have referred to two significant periods of its early development: 1869 to 1909 and 1909-1930. The earlier period is associated with pioneering efforts in public education, when funding, programs, and personnel were in their infancy. Buildings not specifically designed as schools were frequently rented or purchased. In general, purpose-built schools dating from this earlier period were smaller, less numerous, and not as well constructed and designed as those dating from the later period. Schools from the later period, when Dr. J.A.C. Chandler was named Superintendent of Richmond Public Schools and Robinson its architect, embodied the increasing importance of public education to the economic prosperity and quality of life in the City of Richmond. During the latter period, Chandler and Robinson embarked upon an extensive school building and renovation program. Richmond operated a segregated school system throughout both periods.

In 1991, the Virginia Department of Historic Resources undertook a survey of all Richmond public schools during these periods. At the time, there were no definitive studies on the history of education, so this DHR survey assisted in providing valuable context and information about Richmond’s historic school buildings during these early periods from 1869 to 1930. This survey work is now outdated and could benefit from additional available information and expansion to address schools developed in later periods.

*Update: On March 26, 2020, the demolition plan was approved by City Council.

In 2017, the Richmond School Board announced plans to build a new George Mason Elementary School as part of a larger comprehensive plan. Designs for the new school building to be located south of the current school buildings on the site were approved by the City’s Commission of Architectural Review in January 2019. This approval did not include landscape plans for the larger site or the demolition of the current school buildings. On August 20, 2019, the School Board voted to demolish the existing George Mason Elementary School buildings and an application for demolition is anticipated to be on the agenda for the Commission of Architectural Review on September 24, 2019. Public comment will be heard at this meeting.

Historic Richmond is excited to see the new investment in George Mason represented by the construction of a new school and believes its design to be generally compatible with the surrounding historic neighborhood. We spoke at the Commission of Architectural Review’s meetings on November 27, 2018 and January 22, 2019 in support of the new school, while recognizing that an application for demolition of the existing school would be presented later in the process.

We ask that careful consideration be given to the oldest George Mason structure and potential alternatives to its demolition. For example, could it serve as a field house or some other use in the new campus plan? Could material be salvaged and incorporated into new buildings or the amenities within the landscape plan? We recommend creating a community panel to determine how to best memorialize the history of this school on this site.

In addition, we strongly recommend that the City undertake a comprehensive survey of all Richmond Public Schools to better understand the history of our schools. We ask that an intensive level survey of the George Mason school buildings and site be performed. We note that similar surveys were prepared in connection with the recent demolitions of historic school buildings at Armstrong High School and Westhampton School. Furthermore, the survey and nomination for the National Register of Historic Places for Richmond Public Schools should be updated and expanded with additional information relating to George Mason Elementary School and its role in the larger story of public education in Richmond, and all Richmond Public Schools should be surveyed in light of additional information and resources. 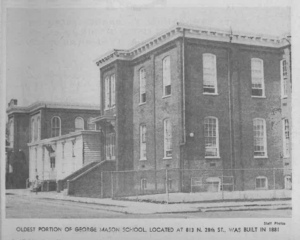 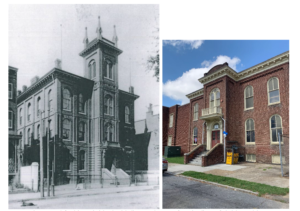 Figure 3. On left: Richmond High School, built 1873. Photocopy from the Library of Virginia. On right: George Mason Elementary in 2019. 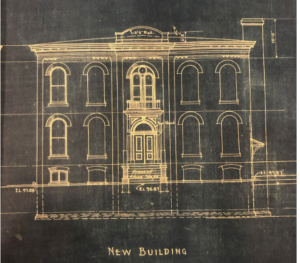 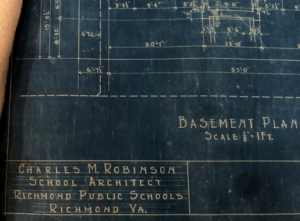