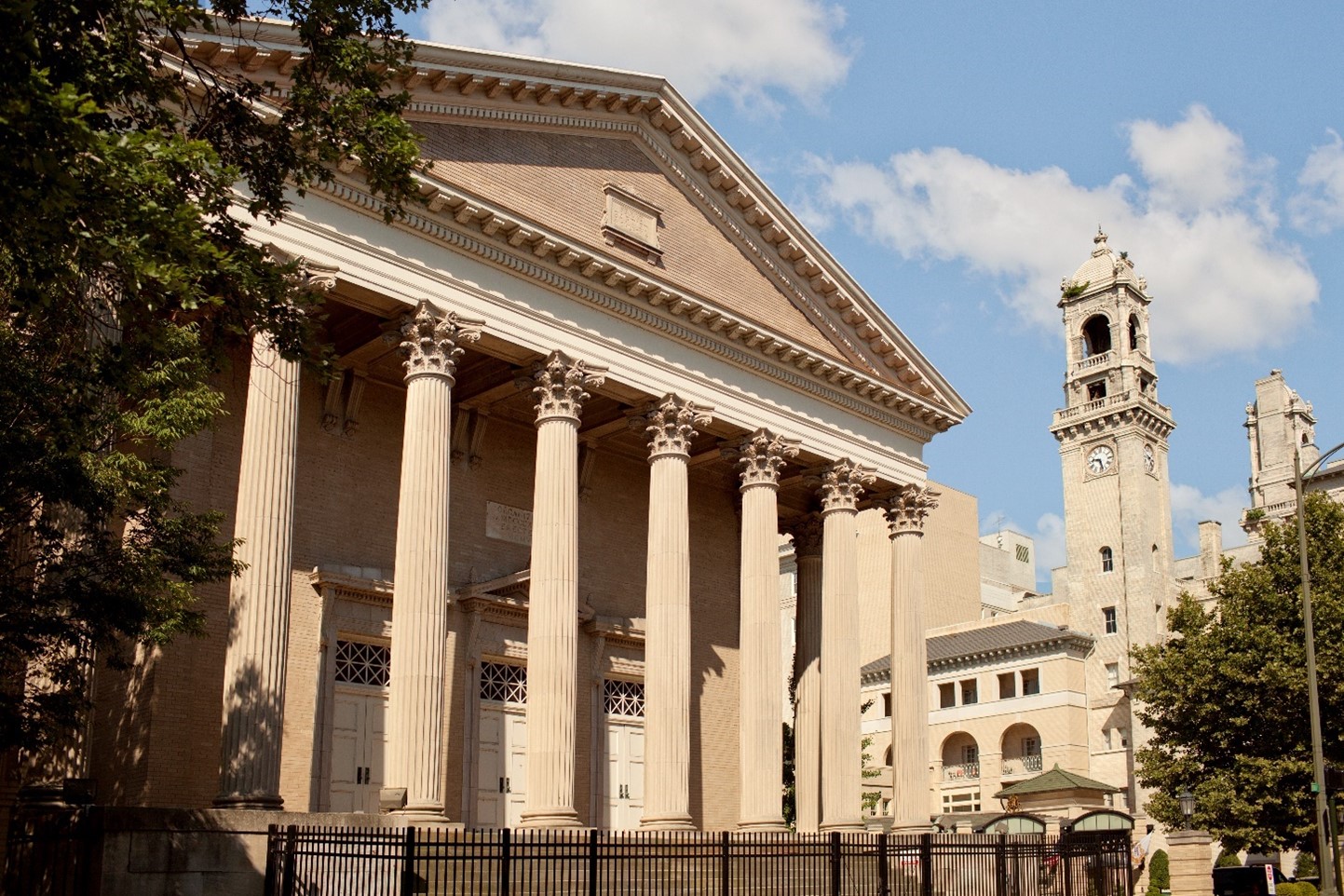 Historic Hotels Of Richmond LLC, the owner of The Jefferson Hotel, plans to demolish the historic Second Baptist Church structure at Franklin and Adams Streets.

About the Historic Structure: The 1906 Second Baptist Church sanctuary was designed by William C. Noland of Noland and Baskervill, one of Richmond’s prominent architects and founder of the firm that is now known as Baskervill. Noland also designed the historic Beth Ahabah Synagogue and St. James’s Episcopal Church, both located on Franklin Street. The historic Second Baptist sanctuary building, a monumental neoclassic temple with a columned portico, is considered the finest design of its kind in Richmond.

Second Baptist is part of a Franklin Street City Old & Historic District created in 1977 and expanded in 1987 to protect an eclectic and glamorous array of historic civic and residential architecture. Second Baptist is listed on the National Register of Historic Places, which describes the building as “one of the most architecturally correct porticoes in the city. The design is derived directly from a Roman temple. It is the most distinguished progeny of Jefferson’s Capitol in Richmond.”

Today, Second Baptist’s classical façade is a striking landmark on Franklin Street. Many consider Franklin Street to be the essence of Richmond with its fine buildings defining the architectural character of Richmond. Franklin Street never looked better with Monroe Park and VCU’s Monroe Park Campus, the YMCA, The Women’s Club, The Garden Club of Virginia and Linden Row recently revitalized.

The Hotel’s History With Second Baptist: In 1992, less than two years after the present owners of the hotel acquired the property, they sought permission to demolish the historic Second Baptist sanctuary as well as its educational building next door, arguing that the structures were badly deteriorated and a haven for vagrants and that the hotel needed additional surface parking. In 1992, the City’s Commission of Architectural Review prohibited demolition of both buildings, but City Council allowed the demolition to move forward. Preservationists voiced their concerns and offered to engage in joint efforts to revitalize the buildings for adaptive reuse, and to develop plans to solve the hotel’s parking needs. Ultimately, the educational building was demolished while the historic Second Baptist sanctuary building was left standing but underutilized. The remainder of the block is now used for surface parking.

The Demolition Plans: In October 2021, the hotel’s owners filed for a permit to demolish the surviving historic Second Baptist structure. The plans do not provide an “after” rendering reflecting what will replace the building, but based on the application the area will either be landscaped or used for parking.

In an effort to discuss their plans and to encourage rehabilitation of the historic structure, we reached out to the owners who noted structural issues and an inability to find an economically viable use.

Past adaptive reuse plans considered for the Second Baptist property included a fitness facility, swimming pool, offices and housing. Similar historic structures have been reused for retail shops, restaurants and even a food hall. Historic rehabilitation tax credits have a proven record of incentivizing revitalization and economic development in historic districts and could be used to help finance a project. With or without the financial assistance of tax credits, we can see Second Baptist’s refreshed exterior housing any number of amenities to burnish the hotel’s five stars and to enhance the visitor experience to Richmond.

Like Thomas Jefferson’s Capitol, the historic Second Baptist structure was inspired by (and may be a closer copy of) the Maison Carée in Nimes, France. Its edifice provides a dignified and complementary setting for the five star hotel. Saving the historic structure while satisfying the needs of the hotel are not mutually exclusive.

How You Can Help! You can voice your concern with the proposed demolition by writing:

Here is a list of City Council members/email addresses.

We will provide updates here as we learn more.